Following the terrorist attacks in Paris on Friday 13th November, Mark Zuckerberg has released a statement saying the Safety Check feature will now be turned on in future humanitarian disasters. The feature has previously only been turned on for natural disasters, such as earthquakes, but Facebook switched it on for a human tragedy for the first time on Friday.

The world watched as news broke about the horrific shootings and bombings in Paris at the weekend, but Facebook reacted in such a way that allowed 4 million users to get news of their safety to family and friends with one simple click.

The feature works by using your location, if it recognises you’re near a disaster or trouble it will ask you if you’re safe. Once you click OK and mark yourself as safe, a notification is sent to friends and families worldwide to let them know you’re alright, and lastly the Safety Check allows you to check on others and shows you a checklist of friends who have marked themselves safe. 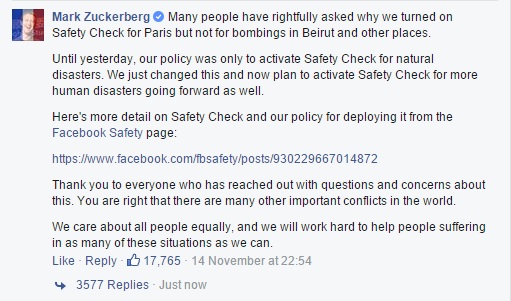 Facebook also launched a temporary French flag filter to place over profile pictures to show support for the victims of the attacks. Social Media responded in an overwhelming way and there has been nothing but thanks from the people of France. The power of the internet clearly shouldn’t be underestimated!

For more information on how you can use social media and use it to your advantage for your business or cause, visit our main site today and we can get you to the top!